I do not wear a helmet when jogging!

The standards of living in Italy are much different than those in the US – including general safety precautions. I have commented in the past about the raucous behavior on New Year’s Eve in Florence – my teenage boys were all smiles. The same could be said of professional soccer matches – acceptable activities at an Italian Serie A match (standing, singing, smoke bombs, flares, and an occasional M-80) v. an MLS game (sitting, clapping and horns!) are distinctly different too. Let’s face it: Americans have a more “Puritan” standard when it comes to acceptable social moors and safety precautions. In my humble opinion, the US tends to be a little bit too restrictive (aka party-poopers)!

Nothing could exemplify this “over the top” safety consciousness than my rude awakening in Seattle, when I attempted to casually ride a bike without a helmet on a bicycle-only path in Seattle (the Burke Gilman trail). Please bear in mind, that when actually riding a bike, we always wear a helmet (as in our European ride from Amsterdam to Paris). I would never entertain going for a serious ride and sharing the road with cars for 30-50 miles without a helmet. Pictures on this blog from May, June, July and August 2009 evidence that we always wore helmets when riding across Europe. 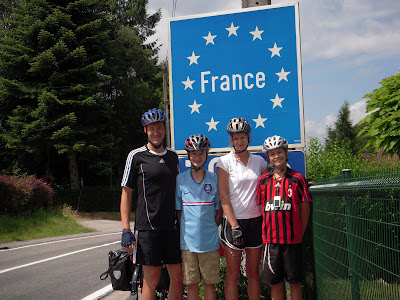 However, our family has adopted a truly European attitude toward helmet-use. Specifically, when using the bike as a simple extension of your feet in City Center to run short errands – no helmet is necessary. Using a bike in the City Center is not riding by European standards, but rather fast-walking. In fact, throughout Italy, Netherlands, Belgium and France, it is the norm to use a bike, sans helmet, and fully dressed for work (men in suits, women in skirts, jackets, scarves, leather shoes and holding an umbrella while commuting on a bike). The Dutch mothers are particularly adept, also managing to hold a cup of coffee, talk on a mobile phone, and cart 2 kids to school too! We were awe-struck.

On weekends, however, when European cyclists dart out into the countryside to ride in preparation for the next Tour de France, they do wear a helmet. But, if jumping a bike to go 5 blocks to the office, school or to the farmer’s market – what’s the point? As European women will also point out, helmets are not very fashionable either. ;) 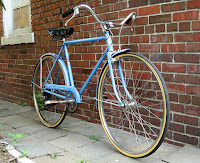 When I returned to Seattle, I bought a vintage ‘72 Schwinn Suburban cruiser to run local errands in our neighborhood - thinking I could bring a little of "Europe" to Seattle. I was mistaken. Despite living just 3 blocks from the Burke Gilman bicycle trail, where I access Zoka Coffee, Gas Works Park, and Fremont (all via a bicycle trail), I have been regularly accosted by Seattle’s helmet-Nazis. Ironically, I cruise on my vintage bike so slow that I can hold & drink a cup of coffee in European-fashion (while reminiscing of my family in Italy). Joggers regularly pass by me and smile! However, the constant barrage of Seattle’s helmet-Nazis is trying. A sample passive-aggressive comment, “Joey, yes, that man is not being smart leaving his helmet at home.” Or, my favorite, “Emmy, I think he might be too poor to afford a helmet.”

Unfortunately, Americans tend to paint things as “black-or-white” or “good v. evil” – our American society doesn’t operate well in the gray. Are we saying that an adult is unable to exercise sound and reasonable judgment? For heaven’s sake, I don’t wear a helmet when jogging! So, why should I wear one on a bike if I am traveling even slower on a bicycle-only path? There are no cars to run me over!

For what it is worth, I did relent and finally buy a helmet to alleviate my own frustration with Seattle’s helmet-Nazis. However, when I relayed this story to my wife and kids (still in Italy), they all laughed and said “not me!”

At least I'm safe now with a helmet if a jogger runs me over!
AUTHOR Giacomo