The New Year is the time for new beginnings, resolutions and challenges. We started 2010 in Florence with a BANG! (literally) and, before we knew it, the New Year was well underway. With active and curious teenage boys, Italy is a playground to be explored. Of all our frolicking adventures in January 2010, here are my Top 5 Memories:

5. Touring Epiphany Nativity Scenes (presepe). The unveiling of the Christ-child to the three wise men is known as the Epiphany in the Christian church; today, it is an Italian national holiday and a just cause for celebration. Recognized on January 6, the Epiphany is preceded for weeks by Nativity Scenes (presepe) assembled in every church, town square and city hall across Italy. There are several presepe that captured our attention across Tuscany, Umbria and Lazio. Whether located in small towns (paese), unheralded churches, or the magnificent St. Peter’s in Rome, presepe were always a work of art, admiration and local pride. The memory of strolling and viewing presepe during many evening walks (the passegiata), will always be one of my favorite times of family conversation, contemplation and simple appreciation. 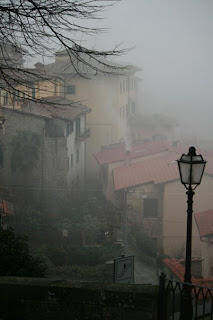 4. Day trip to Sarteano and Cortona. Every weekend, one of our sons has an “out-of-town” soccer game (calcio); sometimes the games are close and other times they are 1-2 hours away. For those games more distant from Florence, we have made a habit of turning it into a day trip across the Italian countryside. This particular weekend, Anthony had a game in Sarteano, a paese that was off-the-beaten track. It was a cold January day and the game was in the clouds (literally); the water density penetrated every layer of clothing (what happened to sunny Italy)! Fortunately, Anthony’s team prevailed and the rental car heater worked well. We descended from one hilltop, traversed the plains alongside Lake (lago) Trasimeno, then eventually ascended and arrived at Cortona (an Etruscan hilltown). Given the time of the year and bitter cold, Cortona was ours alone (a stark contrast to summer when throngs of tourists arrive, inspired by Frances Mayes Under the Tuscan Sun). We climbed and explored many of the staired streets, piazzas, shops and churches; the visit also featured a warm meal together in a local trattoria. Time necessitated our departure (at dusk), but my entire family was ready to return to further explore Cortona; the city is a gem.

3. Celebrating Grandpa’s 70th Birthday / Climbing the Duomo in Florence. Since we knew Janelle's dad would be celebrating his 70th birthday in Florence, Italy, we aimed to make it a very special day for him: the David, the Duomo and Dinner (the “Three-D’s” he says affectionately). Along with the Michelangelo’s Four Prisoners, the David is on permanent display at Villa Accademia. The work embodies the confidence, faith and determination of David at the moment he made the decision to attack Goliath. Appropriately, the David was adopted as the symbol of the Florence Republic (when it was a young, independent city-state). Following a lunch celebration at a local restaurant (including sparkler), we tackled Brunelleschi’s Dome of Santa Maria dei Fiori (the Duomo). Climbing endlessly up stairs and arriving at the underside of the dome's frescoed ceiling is an amazing feat by itself; but, climbing further at an angle inside the dome to the cupola is breath-taking (particularly given my father-in-law is 70!). The cupola offers astounding views of Florence, inspires appreciation for Brunelleschi’s engineering genius, and reminds one of the great potential of humankind. And, lastly, what better way to cap off a fantastic day, but with a memorable Dinner (prepared by Janelle) and shared with your kids and grandkids (followed by a game of cards and dessert!). I think that Orv’s 70th birthday celebration was a success! 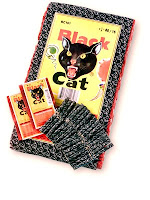 2. New Year’s Eve in Florence. The word “mayhem” doesn’t quite capture New Year’s eve in Florence – it was more like casual chaos. Unlike a prototypical American city, Italy is made of stone and tile, so fireworks are unlikely to burn anything down. More importantly, the casual “live and let-live” attitude of the Italians (and the police), combined with their penchant for festivities and boisterous celebration, made New Year’s eve in Florence one of the most memorable (and dangerous) experiences of my life. The scene in the piazzas at midnight included crowds of people lighting fireworks, firecrackers, M-80’s, and what I believe were ½ sticks of dynamite (followed by wine bottles thrown through the air)! The explosions were unbelievable. My teenage boys were in their element with the other Italian youth (ragazzi!) and were smiling ear-to-ear. To make the mood more festive (aka dangerous) – there was no organization, no designated areas for lighting fireworks, and no crowd control. The Italians just make it work, while being fashionable at the same time (jackets, scarves, boots and stilettos!). It was great. About 1am we made it back to our apartment, located one-story above a major thoroughfare. Instead of going to bed, our boys proceeded to join neighbors and shop owners who stood at their doors and windows throwing firecrackers at the feet of pedestrians (really)! Nothing dangerous, just good clean fun! By 4am, the noise finally died down and people went to sleep; at the same time the street cleaners went to work. By 8am, the city was back to normal, completely scrubbed and pristine as if nothing happened – just another normal New Year’s Eve in Italy. Astonishing! 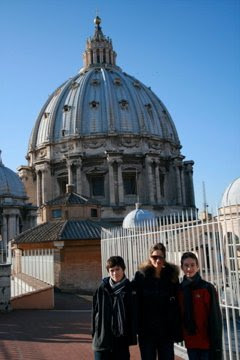 1. Touring the Vatican Museum’s Raphael Rooms and Sistine Chapel / Climbing St. Peter’s. At the top of my list for January, was the full day we spent at the Vatican: most notably viewing its famous artwork, and then climbing St. Peter’s dome. We took a city bus to the Vatican from our apartment near the Pantheon and arrived at opening hour of the museum – a good idea considering the boatload of tourists (even in the “off” season). The Vatican museum collection is simply astounding – home to the most impressive Renaissance masterpieces. The stanze of Raphael (aka the papal apartments) were awe-inspiring and captured significant moments in the history of the Catholic church (interlaced with all kinds of symbolism and sometimes funny nuances). With respect to the Sistine Chapel, words cannot quite capture the magnificence of Michelangelo’s Creation and Last Judgment – simply put, he was divinely-inspired. Personally, I could have spent hours in the Sistine Chapel, but-for developing a sore neck! After lunch in Vatican museum, we made our way to St. Peter’s and prior to entering, we climbed Michelangelo’s dome. It was fantastic. Our teenage boys bounded up the stairs with energy and enthusiasm, while we carried up the rear. At the top of the first level, we stood along the inside of the dome looking down upon the Crypt of St. Peter and Bernini’s Baldachin, while gazing up at the jeweled mosaics (awesome!). We climbed the final ascent of the dome (at an angle) before arriving at the cupola; for our efforts we were rewarded with a stunning view across Rome. We took pictures, identified the famous Roman hills, and explored the rooftops, before descending to enjoy the treasures inside of St. Peter’s (including the Pieta). To commemorate our Vatican visit we purchased a special crucifix for our home, which will always remind us of this memorable day. 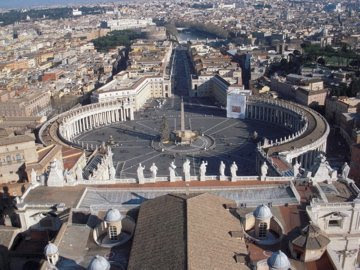 Other honorable mentions for my Top 5 Memories from January 2010, include: running across a wild pack of Cinghiale while driving in the hills above Greve in Chianti; a day trip to Certaldo and San Gimignano with Grandpa/ma; touring the Pantheon, Piazza Navona, Campo dei Fiori, the Campodoglio and Roman Forum; driving the windiest road of my life from Poggibonsi to Castellina in Chianti; enjoying the evening passegiata in Rome; throwing coins in Trevi Fountain; sharing a scrumptious meal with Grandpa/ma at Chianti’s in Rome; playing cards at a sidewalk café in sight of the Coliseum; climbing the Spanish Steps; surviving the Boca della Verita (hand intact); sharing a splendid meal with my family at a local Florentine Osteria; and, of course, a multitude of amazing meals prepared by Janelle (aka mom/wife/personal chef).

Some memories that I will always selfishly cherish were shared only with Janelle (hence it didn’t make the family list above): late night walks across Rome with the love-of-my-life (sans kids and grandparents). I had lived in Rome as a college student for about 5 months and fell in love with the city then; sharing it with Janelle was delightful. Though we only had a few hours each night, Janelle and I toured the Eternal City arm-in-arm walking through many districts, backstreets and corridors. We simply talked, enjoyed the sights, and soaked up the splendor of Rome; of course, we ended each walk with a late-night glass of wine at a local bar or restaurant. How fortunate I am to have a best friend who shares my passion for life! Thank you!

Thanks again to my in-laws (Grandpa/ma) for making the long trip to Italy and sharing so many of these memories with us!
It is great to be alive!
AUTHOR Giacomo