not so fabulous friday, round 11 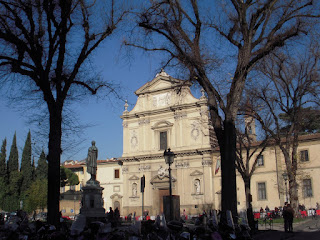 Today I forced myself to roll out the door and frolic---even if it meant I had to crawl.

Because today James grabbed an early train, a long flight and headed back to the states to follow up on some 'job stuff.'

It was awful to say goodbye, especially not knowing the exact timing of his return (but he will be back, so no worries!). So I stepped forward, aiming to be strong and embrace the situation. Most likely, I made it worse by going about a Friday as if it were normal routine. Because our Friday routine, as you know, is to frolic around Florence---taking in the sites and sounds of the city while spending quality time together. Huh. 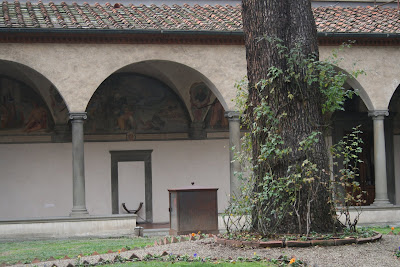 But I know that even if I am touring solo, it is a fabulous opportunity to take in what Italy has to offer. It isn't every day you get to live in such a fabulous city. And I have days of absorbing to do. 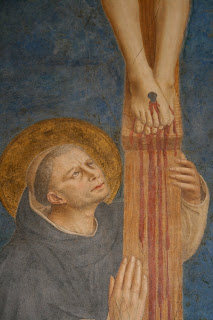 So I cycled through the cities' stone-worn streets and went to the San Marco Museum. James and I had meant to check it out, but it didn't fit in [this time]. We wanted to go visit San Marco's because it has famous frescoes by Fra Angelico, the cell of Girolamo Savonarola (there is a marker in Piazza Signoria of where he was burned at the stake) and a fresco of the Last Supper by Ghirlandaio (Michelangelo's first teacher/studio). I have to say, reading the Agony and the Ecstasy

has made my time in Florence infinitely meaningful! His life, entwined with so many other artists and politicians has served as a plumb-line with which to absorb this city. Knowing about his life and struggles contextually and historically makes this city make sense.

It only cost 4 euros and the San Marco Museum was much larger than I had anticipated. There were fabulous frescoes, a library, small galleries, two courtyards and the original rooms where monks lived. It didn't have any excerpts to read in English, so at least I had knowledge from Michelangelo's life to better appreciate the context of this monastery, the artists and its patrons. Go if you can, and read a little about it before you do.

(At the little gift shop, I picked up a book for Anthony on Leonardo da Vinci. His next read).