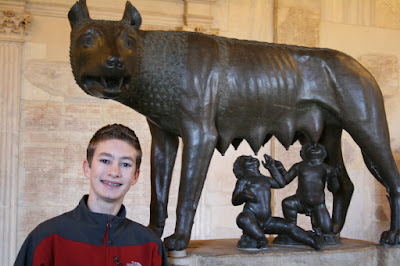 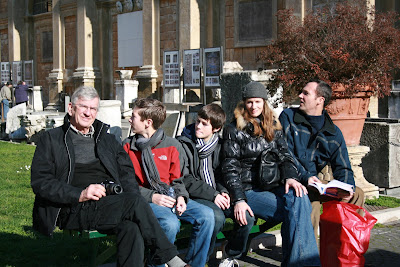 James spent months in Rome as a student, and visited again as a graduate student and teaching assistant. He is both fond of and familiar with the city. Even better, since he was studying as an architect his homework was literally to study Rome's grid, buildings, map and structures. We all benefited.

He often says a lifetime isn't enough time to explore and appreciate Rome. We only had four days.

So began our tour. We landed in an apartment for a few nights, in the heart of the city. It worked well enough for sleeping six, even with its character flaws (bathroom was through all the bedrooms, the only way to have a hot bath in the bathtub was to boil 3 pots of water---no shower, who should sleep on the very short, single bed in the living room?). The location was fabulous, near a grocer for snacks/breakfast and cozy enough. 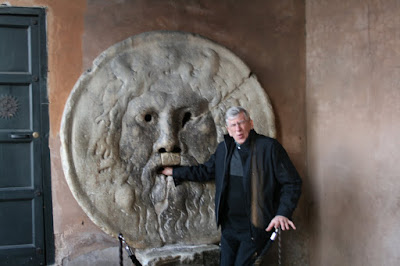 The first day we walked around the city with our fabulous guide (thanks James... can you hold that umbrella-marker higher? So we can see you?), and dined in the piazza near the Pantheon. In 3 1/2 days we saw/did the following:

We also briefly saw the Circus Maximus, the Constantine Arch, the Trajan Forum and La Bocca della Verita (the mouth of truth---see picture of Grandpa with his hand in the infamous mouth!).

Here is a link to our whirlwind tour, part 1. And if you want to see even more pics of our adventures, visit this photo album.