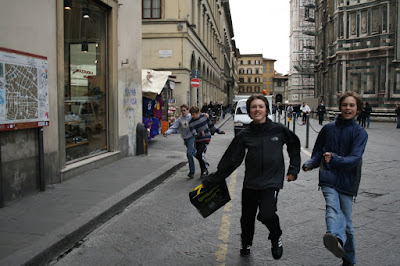 When you are a serious frolicking, breaking routine, seeking adventure, aiming for discovery person/family... not everything always goes as planned. Stories emerge, character is tested, and sometimes you get a chance to make the most of a beyond-your-control-imposed-opportunity. Like say, a volcano eruption in Iceland?

As you know our 'cousins' visited us for 3 weeks---a longer trip than they had ever taken. It was fantastic; we toured Florence and Tuscany, soaked in hot springs, ate too much and tasted regional wines, hiked through Cinque Terre and crossed canals in and around Venice. A few days before their intended departure back to the states, the infamous volcano erupted. Here is the gist of an email I wrote home to friends and family on their departure date (which was supposed to be MON April 19 at 8am from Milan to London to Seattle). 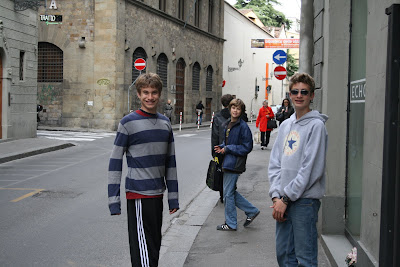 Okay here is the status: my internet has been down since our return from Venice TH (April 15). So we kept going to a nearby Italian Diner to gain access and try to read through the airline stuff... to see if their flights were still 'confirmed'. Even SUN (April 18) by 11 am, their MON 8am flight was still a 'go.' Which meant, we were still on track to rent a van and make the trek to Milan (the AVIS car rental shop closed SUN at 1pm, so we needed to make a decision). 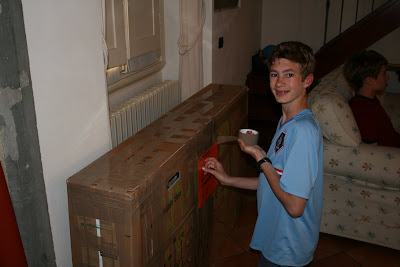 Fortunately, James and I had already reserved a huge van---with the intent of hand-delivering the 'cousins' from Florence to the Milan airport (they had agreed to bring our bikes back to the states---on British Air it is free to check in one bike box per passenger---so we thought we were golden in getting those darn things home. In an effort to say 'thanks for taking the trouble' and to make the 'bike box transition' super easy, we decided to rent a van and deliver them to the door of the airport). Bottom line: we had a van reserved, which turned out to be a big deal, since the line at AVIS was out the door with people who were trying to rent vehicles in lieu of grounded airlines... many of whom were turned away).

Sunday is the only day you are allowed to drive into the city center (of Florence), so that day we were able to rent the van, drive to our flat and fill it with four bike boxes. I then parked it about a mile away as we waited to depart later that night (we planned to drive between 2am-6am and deliver then to the airport 6am MON).

Around 5pm James called to let us know the flights had been canceled (ugh!). We started to rally: [my brother] Keith and I hit the phone shop for an extra phone (closed), then the cash machine (always open ready to drain accounts) and finally, tucked into 2 glasses of fantastic rosso vino while sitting at a Diner for our token internet access---to update folks, ask favors, and put [my husband back in the states] James on the task (in background to all this Janelle is calling James, the landlord and everybody's brother trying to get at-home internet access---which didn't happen. Though by late Monday we had 1 connected computer. So when I wrote this email I was again, sitting at the Diner with a hard-earned glass of wine).

So no flight: do we drop them at a hotel in Milan or keep them in Florence?

We knew we were lucky to have a means of transportation to an airport (my Aunt was stuck in Paris, then got a flight out of Barcelona and was still trying to figure out how to get to Barcelona). So we voted to take this window of opportunity to get them near the Milan airport. We had no idea if it would be 1 night or 4 or when they could fly again... so we decided if they could get a hotel they would go. James came through: he rallied for hours and landed the KC clan at a fantastic hotel within a mile of the airport---shuttle, pool, breakfast (every little thing helps when you are frustrated!!!)... and they had precedence to extend their stay if need be. 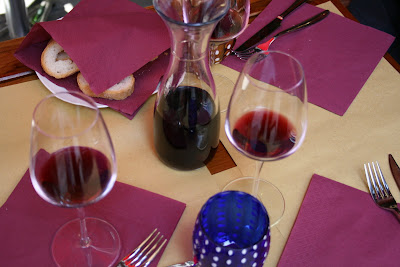 Meanwhile, Janelle's phone had minutes (barely); we used it while driving from Florence to Milan. We ate some pizza then popped into the bike-laden van and left Florence 830pm. It is about a 4 hour drive to Malpensa airport. James called while we were en route---we learned that it really might involve acrobatics to actually get them home (plus their tickets were frequent flyer combined with full-fare etc. which makes it even more difficult to organize/reschedule). James had an agent helping them, and called the airlines frequently. My brother used the hotel computer and created a gmail account (their normal email account was not accessible at the time).

With airports still closed, airlines don't have a lot of answers. You can fly out sooner if you want to spend more money, or perhaps wait a little longer and ride the wave of resolutions from your carrier. That said, the 'cousins' will likely be in Milan for 4-5 days (update: until SUN April 26). Keith can speak to their plans, but it could range anywhere from trying to stay put and relax to trekking into Milan or trying to catch parts of Italy they haven't yet seen (though tricky with limited transportation). There is a chance they could get home sooner if they split up the foursome... but that isn't always fun to maneuver either.

I will say: we had a FANTASTIC time with them and are all so bummed the tail end has erupted with this anti-climactic mess. We made sure Sam and Jack had a few good books to read; no doubt they will try to make the best of a bad situation. We will keep you posted...

The [smallish, inconsequential yet mildly humorous] tail/tale end of this ever-evolving and far from finished saga:

We realized them having bike boxes to deal with would not be a good idea. Who knows where they would fly out of, if together, if staying an extra night somewhere else... so it became obvious I needed to drive the big-aXX van home and bring the four bike boxes home. At this point Italian logistics kick in: you can only drive in city proper on Sundays and before 730am (or after 730pm). I had the van rented until just noon on Monday. It was about 130am and I knew if I didn't turn around and drive straight back to Florence it would mean Anthony and Caleb and I would be hand-carrying, trip after trip, awkward bike boxes 3/4 of a mile to our apt... then still get the van back on time (fortunately they didn't go to school that morning since both bikes had flats... angry condo Italian owner stuff... but no matter).

SO I got back in the van with Cindy's stash of 1 coke, 1 snickers and a fruit bar and headed for Florence (tell her I ate/drank them all!). I made it until about 300am when I was getting super tired. I pulled over and slept for an hour (guardian angel tickled my face for waking...). At 4am I drove another 2 hours and landed in Florence around 600am.

Because it was before 730am I could pull right to my door, open and dump the four large bike boxes. Of course just after I dumped the fourth box: a big garbage truck pulled up behind me. So I walked over, apologized for blocking the tiny pedestrian-only street and they said no prob, how many minutes [should we expect to wait---because Italians don't mind waiting. It is quite cool]? And I looked at them with tired sheepish mommy-bear eyes and said "only 4 minutes if you help me carry up my boxes."

And so, they did.

And it only took 4 minutes. Then I jumped in my larger than life caravan and navigated the widest streets I could find (Keith, you should be rolling your eyes here;))) and made my way back to the garage (parked it in the last spot available!). And even managed to make sure (Dutch in me be proud) the tank was completely empty so it would be worth my money for them to fill it up at the rental place... sigh. And since my bikes are boxed and now safely back where they started---and not by the garage---I walked the mile back across Florence to our home in the wee hours of the morning, taking int the quiet, familiar feel of this lovely city;)... opened the door, climbed over a rather-large pile of bike boxes and slept.

Kisses to all... with a bit of a wine-smudge.
AUTHOR janelle