hurling across the globe 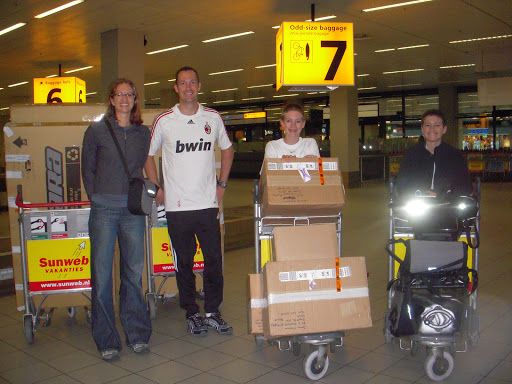 We have made it… but not without incident.

It was like drinking from a fire hose, those last few weeks before we left. Packing up the house and our lives, closing all accounts, wrapping up details with teachers, getting passports, visas, and scheduling places to stay upon arrival. We sold stuff on Craig’s list (an air hockey table, 2 televisions, a lawnmower, a car and a van---to name a few).

We signed up for Skype and a mail service, shut off our cable/internet/cell phones and tied off our lives at school, work and home. The movers came and went, and we scrambled to clean our place while traipsing around town to deliver our boys to their next musical practice/sequential shows. We landed in a nearby hotel and kept our heads above water. The excitement, the reality of us leaving for a year and embarking on this big adventure was decidedly pushed out of my mind---there was too much to do and important good byes to fit in.

And then we got on the plane.

And I had a gin and tonic.

And soon thereafter, the perfect storm ensued. Stress decompression settled in from the weeks---months---of hurling ourselves (yes, pun intended) toward this event. And it all came to a screeching halt when we landed on the plane with nowhere to go, nothing to do, and the goodbyes behind us. Our only task was to adjust to a new time zone---and sleep I did not. Stress release, no sleep, gin, forgotten stomach acid medicine and a very, very large dose of motions sickness: like I said, the perfect storm. Thank god I only hurled once.

It was running between flights that nearly did me in. We whipped [ehem, waited impatiently would be a better description] out of the very last row of seats (#52), through international security, dumping water bottles and running with our laces flailing behind us. We barely made our hopper flight from London to Amsterdam. After all the rush and an overdue migrane, it was in our seats for lots of taxiing on the runway---a short flight---and a lot of taxiing before we were allowed off the plane.

Fortunately, the boys slept and James kept his cool… which is a mighty good thing since in front of us was a 3 hour stint in a nondescript corner of the airport. Tired as all get out, we grabbed four carts and filled them: 2 with huge bike boxes, a 3rd with boxes we had filled with 4 panniers and extras (helmets, liquids, locks, etc.), and the last with the panniers we had carried on the plane. We found a corner, and James assembled the bikes. (For the record, it would have taken no time at all, save for the fact we had REI box them for us and they disassembled them down to the nuts and bolts. God forbid they just remove the wheel and make sure they fit in the box…).

Three hours later (and I would say a few beers later, but that would have been quite awful on a very sketchy stomach), we were laden with panniers, had recycled reams of cardboard, and were ready to ride.  We found a nearby trail, and Carmen led us to our hotel 2 miles away. We were hungry enough not to delay sleep, and inhaled dinner en route to our pillows.

The next day we woke up late, repacked our panniers, ate breakfast and took off for our first ride—approximately 12 miles---into Amsterdam. We took in the coutnryside, marveled at the neat rows planted in fields, learned to follow bike paths (friendly honking helped!) and saw our first windmill. Hurling ourselves across the globe is easily worth the queeziness it takes to get here.

My friend left me a really great quote, as we left for our trip:

"Man cannot discover new oceans unless he has the courage to lose sight of the shore." -Andre Gide

I suspect a bout of sea sickness en route to discovery, is normal...