Don’t pass up on the GPS when cycling across Europe 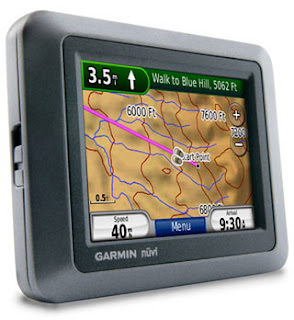 I have used GPS systems for years in rental cars, coming to heavily rely upon the trusty Hertz NeverLost to get me safely from one business meeting to the next with minimal effort.  Only on a few occasions was I led astray with NeverLost (e.g. downtown Boston, where it routinely fails to ‘acquire satellites’), in which case I have been left feeling AlwaysLost.

As we prepared to embark on this 90-day bicycling journey across Europe – from Holland, to Germany, to Belgium and France – I read several guidebooks cover to cover.  All the guidebooks mention the virtues of their own maps and in some cases recommend specific Michelin maps.  Now I am not naïve enough to think that a guide book map was sufficient, so I did proceed to purchase several Michelin maps.  However, after buying 4 of these maps (at $20/each), I quickly began to realize that I was going to dig a deep hole.  To get the degree of accuracy needed for cycling (1:50,000), I would need to buy at least 20+ maps to cover the extent of our entire trip (a 1,000+ kilometers).  And, I would still be lost locally when arriving in villages, town and cities with its own circuitous network of streets.

So, I took the plunge and bought a personal GPS device – a Garmin Nuvi 500.  It is still too early to extol all the virtues of this device, but it has already made our journey a 100x easier and stress-free.  Instead of unfolding, folding and re-folding maps every 20-30 minutes (as we go off a map’s edge in the map case on top of the front pannier), I can now just follow my trusty Garmin. My oldest son, Anthony, affectionately calls the GPS – Carmen – due to the attractive female voice which provides directions with a British accent (I’m thinking Carmen Electra in an Austin Power movie – but with a better British accent).

As we weaved across the lovely Holland countryside yesterday from Schipol airport into downtown Amsterdam’s Jordaan neighborhood (where we rented an apartment through VRBO.com), we soaked up the sights, sounds, culture and craziness that the city has to offer.  Most importantly, I was able to keep my attention focused on the immediate street activity (100’s of other bikes, scooters, streetcars and road impediments), which we circumnavigated safely and deftly.  Instead of looking down at a map case to discern directions, our trusty Garmin guided us safely to our destination across a myriad of canals, and bridges (notwithstanding a few brushes by scooters and cars that livened up the trip). ;)

For those interested, I elected to buy a Garmin Nuvi 500 because it has a large touch screen, offers tons of maps and is WATERPROOF (which is ideal for cycling out in the elements).  It came with maps for all of the United States, so I purchased an additional City Navigator NT series of maps for Europe.  Together with a bicycle mount, it set me back about $475 ($300 for the GPS, $150 for the European maps, and $25 for the cycle mount).  In contrast to roughly $400 of Michelin maps that I estimated would be necessary (let alone difficult to find ahead of time, since many were not available in the US or on Michelin’s own website), the money for a fully outfitted, cycle-ready Garmin Nuvi 500 was a no-brainer.   Stress-free and we get the added company of Carmen on the trip. ;)