My Top 5 Favorite Memories from May.... 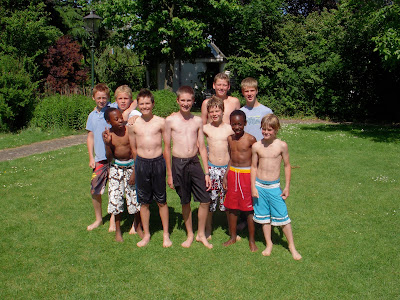 We’re just a little over 2 weeks into this trip, and we’ve already had a ton of fantastic experiences. (BTW: “Fantastic” is my word for the trip, because it seems to describe everything for me).

Anyhow, here are my top 5 favorite memories from our European expedition during the month of May.

5. Eating in Amsterdam. We had several amazing food experiences in Amsterdam, namely pastries, coffee, desserts and Dutch pancakes (which is essentially another dessert). Pastries are fresh everyday and tantalizing to the eye and palette. Coffee (Illy espresso) was thoroughly enjoyable on bright sunny mornings with Janelle at our favorite café. Dessert was the highlight after an amazing meal at our best meal of the trip thus far at Brix (definitely a ‘must go’ local restaurant). And, of course, Dutch pancakes (thinly sliced apples, thin pancakes, powdered sugar and a reduced apple syrup). All amazing food experiences, particularly given that all were within 1 block of our apartment in the Jordaan. 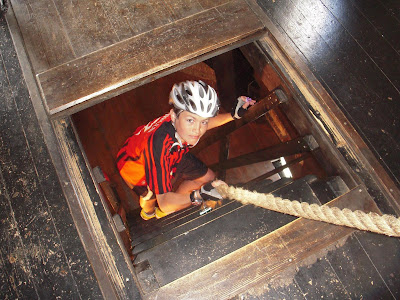 4. Going into a working Dutch windmill. Unexpectedly, we had the opportunity to climb up into, through and around a working Dutch windmill in Schermerhorn. Most windmills in Holland do not operate daily, and many are also privately owned. However, in Schermerhorn, we were able to see all the inner-workings and mechanics of a windmill first hand. Of course, it involved climbing up 3 stories on old ladders, and crawling on all fours underneath huge gears and shafts, which had all kind of warnings in Dutch (something like “touch this and lose your hand or die”). No way we’d ever get this close to something so interesting and mechanical back home. Most intriguing was the corkscrew water wheel, which moved water from the lower dijk to the upper dijk (that is dike in Dutch). 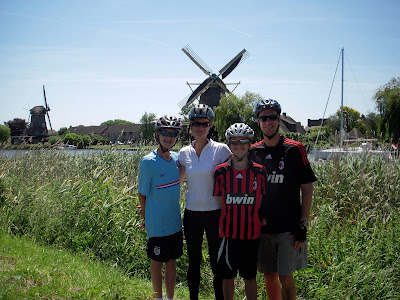 3. Cycling from Amstelveen to Hilversum. We have put in over 200km cycling thus far, and by far the most interesting day of cycling was also our longest (about 48km / 30 miles). We started in south Amsterdam, then made our way past AJAX stadium (a UFO space ship of a soccer stadium – pretty cool), then along the Vecht River towards Hilversum. The ride included several windmills, forts, animals (cows, sheep, goats, geese, rabbits, horses and all other kinds of birds), a bike ferry and of course canals, canals and canals. We also had the pleasure cycling through a surreal environment among reeds and thickets on a single track dirt travel for about 5 km from Nederhorst Den Berg to Ankeveen.

2. Self-guided Canal trip in Amsterdam. One of our themes on this trip is to have the boys lead us whenever possible while cycling (they each have their own map case and alternate days navigating). Same was true of course for a canal ride through Amsterdam. We rented a small aluminum boat, loaded up on wine, bread and cheese, prayed for good weather, headed to the boat rental, and then handed the engine controls to the boys. It was great to see the boys gladly take the controls of the boat, then guide us through the canals of Amsterdam, while Janelle and I simply indulged in the scenery, food, wine and tried to encourage the boys to avoid any boat accidents. ;)

1. Watching the boys play soccer in Nigtevecht and jump into a canal. By the far one of the best decisions we had on this trip was to have each boy pack a soccer ball (visibly secured on the back of their bikes with a bungee-style net). The balls immediately invite play at every town square, any patch of grass, church piazzas and fill the void whenever there is waiting involved. Such as waiting for James and Janelle to finish a glass of Sambuca (after dinner drink of course), which led to a full out game in the Haarlem town square with about 8 other Dutch children. They were the entertainment of the night.

However, that experience was trumped by our recent wait for a bike-only ferry in Nigtevecht this past week. We had an extended wait (since the ferry driver was “off” for a 2-hour lunch), but no worries, there was a small patch of grass (10m x 20m), 3-4 other kids just off from school, sunshine and a soccer ball. Bikes were parked, Janelle and James went searching in the small town for a bottle of wine and chocolate to kill the time (gladly assisted by a local Dutch resident who rode their bike with us to the store), then returned to find an all-out makeshift game of soccer at the ferry dock (alongside this picturesque canal).

Language was no barrier, and soon other kids in the town of Nigtevecht (about 1500 residents) learned the “Americans” were at the ferry dock. As a result, the game doubled in size and began to involve jumping into the canal if a kid was nutmegged (in soccer terms that means if the ball is passed unexpectedly between your legs by your opponent). It was surreal and an absolute pleasure to witness.

The ferry driver returned to work, but we elected to delay our departure across the canal another hour to allow the fun to continue. With 15km of cycling ahead of us, we did eventually have to depart (sadly). But, the kids exchanged emails and then a couple kids elected to swim across the 50m canal (with us on the bike ferry) just for the sake of it.

We had several goodbyes from across the canal as we climbed back on our bikes and continued our journey. But, this “Dutch experience” left an impression on all of us and certainly made memories for a lifetime.
AUTHOR Giacomo