For the past several years my professional career has necessitated a lot of long hours, and too much travel – unfortunately at the expense of time with my family. That was a big motivator to take this ‘trip of a lifetime’ - cycling as a family from Amsterdam to Paris.

In response to our decision to leave it all behind, we got some familiar responses:
(1) “That is awesome, have a great time (can I fit in your pannier?)”
(2) “You’re nuts, why would you give up your career and house to do that?”
(3) “Do you think you can really handle being together 24x7?”

I had expected the first two responses, but the third response---I hadn’t considered. I didn’t think it would be a challenge. Think again.

We are a family of go-getters. All of us set goals, work and play hard, live life with passion and have strong opinions. Back home in Seattle we had busy lives balancing work/school with extracurricular sports and activities. As a result we thirsted for time together as a family, and enjoyed dinners, games, sports (soccer/cycling/skiing) or a weekend escape to Orcas Island. We really like each other and have fun simply being together.

Fast forward 1 month into our ‘trip of a lifetime’ and we’ve now been together for 750+ hours straight. If you consider that on a regular weekday in Seattle we might have just 4 hours together---you can imagine that the transition of being together 24/7 can be a little overwhelming. Consider this mix: I am a Type A former CEO, my wife holds an MBA and Culinary Degree and has equally strong opinions (think Courtney Cox on Friends), and our kids are budding adolescent boys who need our feedback less and less (12 and 13 years old).

Yes, there have been fireworks on a few occasions, but, somehow we’re making it through. And, I am happy to say that we are settling into a rhythm of sorts. A few lessons we’ve learned thus far:

(1) James (myself), the now omnipresent father, is recognizing that his role in the family is transitioning from making decisions, to asking for input. In Seattle, I was the “fixer” of things (particularly when our kids were young). Now, I am working on being more engaging and letting others take the lead. I did give up “leading” the troops when cycling (in an effort to allow the boys to learn how to read and navigate from maps). But, I am working on translating that to other areas of our lives too. Frankly, our kids are so dang smart – sometimes it is humbling and hard not to feel useless (a tough thing for fathers). ;)

(2) Janelle deserves an award for living out of 2 panniers, keeping everyone happy without a refrigerator, and “keeping the peace” among her 3 boys (myself included) who are prone to share differences of opinion. Janelle is “low-maintenance” – thankfully – otherwise this trip would not be possible. She has come to realize that her boys get ‘crabby’ when they are hungry, so keeping a stash of stroop waffles (referred to as Scooby Snacks) around is a good idea (we refer to this stomach-filling as ‘taming the tiger.’).

Notwithstanding family dynamics, Janelle’s biggest challenge has been containing her desire to write everyday given the lack of time and connectivity (despite James’ exhaustive efforts to provide her with Internet access---not even throwing money at Internet Service Providers in Holland seems to work---but more on that topic later). Amazingly, Janelle has continued to maintain www.talkoftomatoes.com and start www.familyfrolics.com while traveling abroad on bicycles. 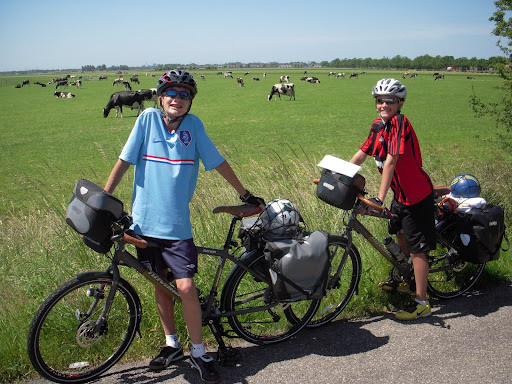 (3) Anthony is a natural leader and budding plaintiff’s attorney (at age 13), so naturally he and I have clashed on matters involving navigation and safety. I have since given up navigational control (while retaining a right to request clarification), and turned over all “locking of bikes” to Anthony. Anthony recognizes his parents’ attempts to retain control are futile, that he actually often knows more than we do (scary!). Anthony has recently demonstrated some “Dutch-ness” with respect to his willingness to bike ‘suicide’ – down the wrong way on a one-way street. But, still retains a stern respect for safety, evidenced by his refusal to cross an intersection without a green light (testing the patience of the rest of his family who have already ridden ahead). ;)

(4) Caleb is a competitor at heart and passionate voetball player (that is Dutch for soccer). Caleb has managed to befuddle his parents in multiple card games, and has recently ‘crossed the line’ by inventing a new game called “Snickelfritz” (thank you Isabel) – a combination of sorts of Chicago Rummy, Speed and Nerts. While Caleb is ready to play cards at every meal, he’s come to realize that his parents can actually win a game or two (even if we need reminders of the rules every game). Caleb’s seemingly boundless enthusiasm to play soccer, including juggling, kicking, passing on every walk, every street and in every piazza, is welcome fun, but can test the patience of his brother and parents when ‘culture’ has been our intended focus (for an hour or two?). Caleb tolerates his family’s pleas for downtime by redirecting his efforts to his sketchbook – a fantastic outlet for his creative energies.

Yes, there have been a few bumps along the path as we’ve invaded each other’s lives and space. 24x7 is definitely an adjustment – even on a ‘trip of lifetime.’ However, we’ve managed to settle into a good groove and find opportunities to support one another. Above all, communication has been key. In fact, we probably over-communicate: we’re never short on opinions on what to do next, or how to solve a problem. But we are learning to listen better and compromise more.

The biggest challenge for me, as a father, is letting go and watching our boys transition into young men who are ready to conquer the world. (Cheesy, I know, but true). But, I take solace in the fact that as they become map-reading masters on this trip, they will be better equipped to navigate their lives going forward.
AUTHOR Giacomo