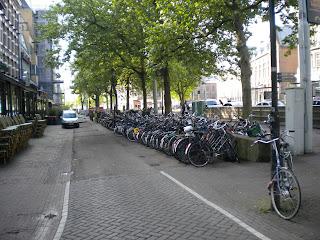 First, sorry that I have not gotten a post up yet, as I have not had a lot of computer access (unlike my mom, who stays up late at night blogging...)

The first two things that struck me about Amsterdam is the amount of bikes (and other two wheeled transports), along with the tightness of the city. I say tightness because many roads are one lane, and there is absolutely zero space between the buildings, so much so that it originally appears to be one large continuous building of many styles. Amsterdam is a city that is completely different from any other U.S. city. It is very... organized, and often a street will have separate bike and tram lanes from the normal car lane. Though it was designed long ago, this city easily surpasses nearly all other cities that I have seen before.
My favorite part about Amsterdam, however, is the overall quality of life. People are constantly outside, on boats, bikes, and scooters. Speaking of boats, as you can see in my picture at right we went boating on the canals of Amsterdam---mainly the four rings of canals in the main part of Amsterdam. Caleb and I took turns driving the boat... also shown in my [profile] picture.

Thankfully while we were in Amsterdam we were able to communicate with many people as they all spoke both Dutch and English. That has changed now that we are outside Amsterdam, but with a little help we have made it this far. Overall Amsterdam was a great experience and a good start to our trip.
AUTHOR Anthony