5 baths in Tuscany (aka hot springs, terme or bagni)

My goal for our week-long road trip was to visit at least one of the hot springs in Tuscany. I 'scheduled' time at the Bagni dei Saturnia on day 4. Little did I realize---that was the just the beginning. Although I only planned for one, we rallied and visited 5 baths in Tuscany (4 public, 1 private).

Public means: accessible to all, no changing rooms, no fees, open. Private baths are often associated with resorts or hotels, may have specific hours and seasons and are often modernized (including dressing rooms, lockers, etc.). Oh, and at least re: this wintery time of year, the private baths are busier.

I wanted free, open, authentic. So we went for public baths, though were fortunate to have a private bath fee inclusive in one of our stays so experienced the posh side of terme as well. In the end---private or public---no two baths are alike. In fact, they aren't even close.

The temperatures vary from body temperature to a the hottest of hot tubs. Some smell heavily of sulfur, and some only offer a faint glimmer of their sulfury source. Some baths are small, some large; some are more like a waterfall and others have all sorts of pools lined up for the taking. Some merge with large rivers, so you can jump from hot to cold... the experiences are as diverse as the baths that populate Tuscany---and there are many.

Here are 5 pictures and quick excerpts re: the baths we sought and sank into. All 5 are in Tuscany, south of Sienna. In order:
For more pictures of baths and our entire 6 day Tuscan road trip, peek at our photo album. 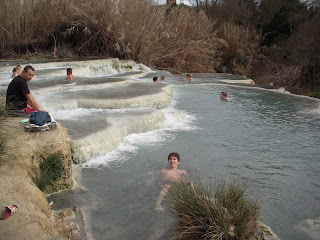 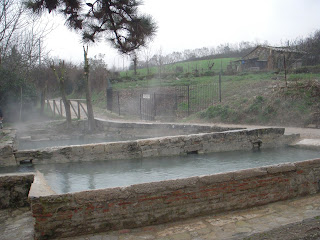 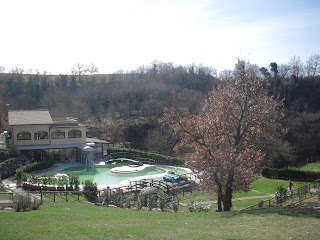 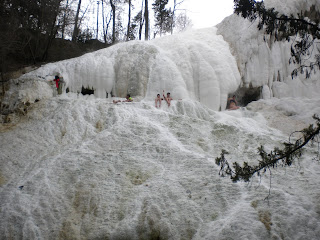 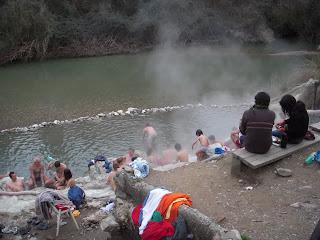