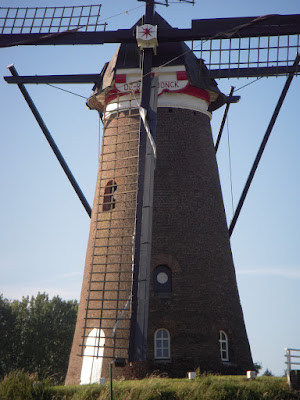 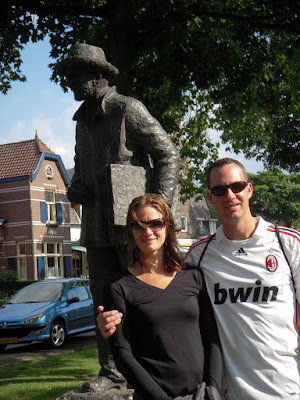 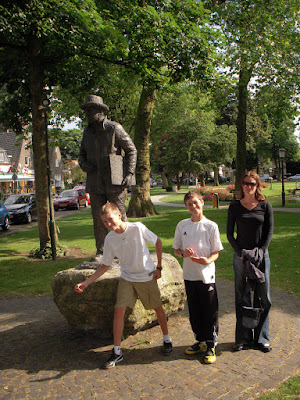 We have said it before and will say it again: read Lust for Life, the biographical tale of Van Gogh (Irving Stone).

Because of it, we stopped in Neunen, a place where Van Gogh lived for some time with his parents. His father was a pastor of a small Protestant church (dwarfed in this city, by the large catholic cathedral). We saw the parsonage where his parents and sisters lived, and the little studio in its yard, where Van Gogh slept and painted.

We went on the walking tour early in the morning, and saw the little church, and a windmill (flour mill) that appear in a handful of his paintings. We saw the famous lime tree, some 400 years old, that boasts its existence during his time. And of course, we stood by his token statue for photo sake. But easily my favorite visual icon was that of the cottage where Van Gogh painted 'The Potato Eaters,' one of his most famous paintings... [easily] the one I stood in front of longest (while visiting the Van Gogh museum in Amsterdam).

Part of his story transpired in this town, the proof is abundant. Our story there was just one night. Well, it was supposed to be two. And I will not forget this single day/night because it was one of my most 'thin' days---strained, on edge, tired, don't mess with me type of thin.

Don't get me wrong: we had had a long, gorgeous ride through the woods, passed reams of tree-lined pastures and eaten a lovely picnic lunch en route to Neunen (from Den Bosch). The underlying story is this: we exited Den Bosch in a scurry, because we had stayed the night in a home where 3 out of the 4 family members had whooping cough and were hacking all night. If Caleb and Anthony thought we were germ freaks before, the bar has been raised, as we shared a bathroom with all the 'sickies.' And I made them use a towel to open the doors and used a sanitary wipe on our door knob. (My excuse? Better safe than sorry and personal hospital experiences due to the same such cough). And so we fled.

And while the woods were beautiful---they added to our bug bite count (are there different kind of bugs here?). The pastures were gorgeous... but endless and all freshly cut (enter Janelle's grass allergies and respective ITCHY eyes).

All which would have been water under the bridge (a fitting phrase for this fine country, full of both bridges and canals), EXCEPT that when we finally landed, tired, allergies on edge and bug-bitten, we parked our bikes for an overnight at an op de fiets. In general, we adore renting rooms and enjoying breakfast---and sometimes diner---at people's homes in the Netherlands. It provides insight into how people live, invites rich conversation, and crafts our own experience.

But in the is case, on this particular day, it was a sweet old lady who smoked cigarettes end to end, all day long, indoors. And she had a companion dog who she affectionately referred to as a circus dog because it jumped on you---on each of us---constantly while in our presence. Tirelessly, and with impressive height. Like a dog on its own personal trampoline right in front of you, aiming for lofty paw-prints. My shoulders were so adorned.

Which by itself, would be again, water under the bridge. BUT after escaping certain germ-inspired death, to cycle through miles of freshly cut grass fields (plus head winds) and hungry bugs... it was ICING on the cake to enter a sea of smoke with a galloping dog. Be proud, though: I only shed 3 tears. And James only made me stay one night, not two. We escaped the second night to Eindhoven (in contrast, one of our best experiences so far!), a last minute change, to stay in a hotel. Thank you James!

These cities have their stories, their history, their iconic members. And we are just passing through, making a few minor memories of our own. For better or for worse, escaping sickness and pursuing health, even poor experiences make us richer: dogs, grass, bugs, smoke and all. Nope, we wouldn't trade this trip for anything.
AUTHOR janelle