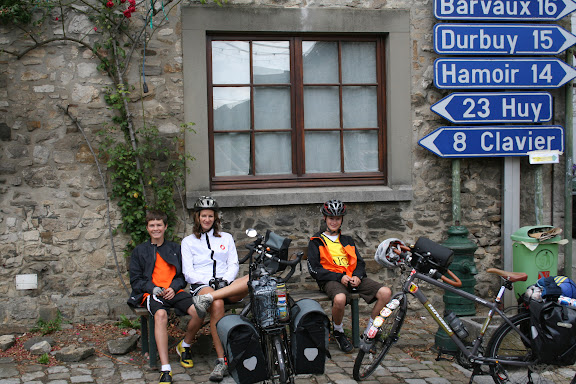 Goodness, we are about to leave Belgium and I haven't even told you a lick about our time here.

That seems to happen, we cycle and explore and eat and slip into bed... pack our panniers, cycle and explore some more, catch up on email and upload photos---then dash off again. And we do journal and blog, but it doesn't even begin to cover all the days and cities and castles and cycle rides...

We trickled out of the bottom of Netherlands into Leige, Belgium (over a week ago). Our first impressions were markedly poor. It was industrial, dirty, train-station ugly. [No offense, Belgium, but I had been in my home-land and was impressed up to my eyebrows.] The city had an unkempt park running through it, the bike paths were hardly marked, if even existent, and the streets were dirty.

But the Netherlands was so cycle friendly and flat, the clogs would have been too big to fill no matter what country followed (oh by the way, I found out Holland only refers to the upper two districts/North part of the country---some southern Dutch man explained to me).

We landed in Leige midday and were able to stack our cycles in our hotel room (a plus, since we have a constant worry they might be snagged, a worry we have been told is merited) and take off to find food (we were RAVENOUS). We were a bit off of city center, so picked one of four cafes---none with big promises. And proceeded to have the nastiest meal of our trip. No blame on the country or city, of course, but it had to happen at some point. (Hey, the beer alone in this country cover a multitude of culinary sins, not to mention the waffles and chocolate...). 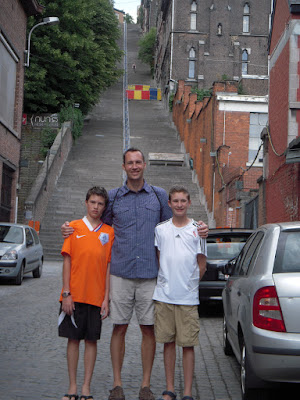 I always feel the need (ouch bad timing in this case) to try what is local, and white asparagus is a big part of this area of Europe, SO I ordered it. And I swear it was just 6 sticks of asparagus, plucked just-then from a can and wrapped in one slice of over-processed deli ham. Throw a few leaves of iceberg on the left and dinner is served. Despite my horror, I ate it because I was starved. And it was bad. So I downed it with two [good] beers and we went back to the hotel and took our first, long nap. Well, James and I napped anyway. The boys wrote in journals and sketched, caught up with reading and email.

But all is not lost. After our nap, we showered, grabbed pizza from nearby (also hardly edible, but oh well). Then we downloaded a movie---Inkheart---from itunes and watched it as a family (hurray for wifi and the beds were really comfortable, huge pluses in our book). The next day we wondered into town to explore Leige and stumbled upon a few highlights: a french boulangerie for breakfast complete with over sized coffees and amazing pastries, our first run-in with nutella snack packs, and a 400 plus staircase that led to a big view of the city.

The staircase in particular was a good memory, because we---for better or for worse---couldn't resist climbing it. And we climbed and counted and climbed and counted and finally reached the top, just in time for the dark clouds to part and dump rain on us. Torrential. By the time we reached the bottom we were as wet as if we had fallen in a lake, and laughing and running to the nearest open door... which ended up being a big sport store! Which was no problem because that is the kind of store we all love. The boys picked out sunglasses, ironically, and we squeaked around in our shoes and waited a good 20 minutes for the rain to subside. 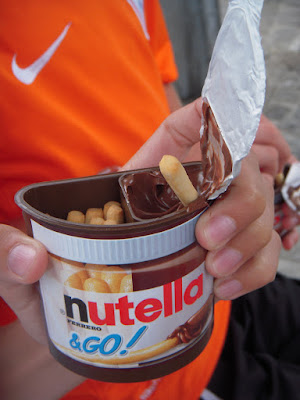 After that adventure we walked a few more blocks, ducked for cover again for yet another 15 minute down pour---this time for the parent set to check the city map and the boys to indulge in a nutella snack box (better than carrots and ranch, or those crackers with a square of processed cheese). Then we trudged back toward city center and landed for lunch. Indoors---just to be safe.

And we always get a tickle when we find lunch for a good deal (often it is meat, cheese and rolls from the grocer that we put together while cycling), especially when it is a 'sit down' meal in a city. We ordered sandwiches which were the length of half a baguette. So two halves fed all four of our mouths and 12 euros later (including drinks!), we were full and on our way. Oh, and since the menu was in French, James and I ordered by pointing at a sandwich... and it was filled with ham and cheese and sliced hard-boiled egg. They do that here in Belgium: layer hard-boiled egg on sandwiches sometimes. (And yesterday we ordered sandwiches at a shop, a build-your-own like Subway in concept but unlike Subway because we are in Belgium and it is huge baguettes...) Anyway, Caleb added hard-boiled egg slices with his mozzarella and cured ham and loved every bite.

So there are a few highlights and lowlights of Leige, Belgium. Our first impression but most certainly not our last. Belgium has been full of hills, a novelty to our cycling experience and a bit of a shock to our thighs. We have seen piles of chateaus and castles and mini-looking castles people affectionately refer to as homes. It is very green and full of old stone walls and stone houses, and houses made from old stone walls. We have stayed in some of our most beautiful accommodations, even a chateau once or twice with large glorious baths. So no, it hasn't been all bad, in fact lots of it has been lovely and ALL of it downright memorable.

And today we shove off to France: and how timely since it is Bastille Day!
AUTHOR janelle