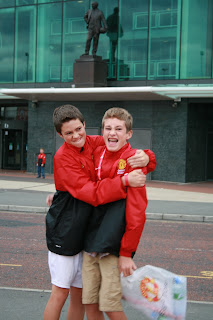 We made it from Amsterdam to Paris, to London and Manchester and have landed---safely---in Florence, Italy.

The boys had a splendid time at Manchester United Football Camp; we were all pretty excited to see Old Trattford (stadium where Manchester United practices and plays home games). While the boys were at camp all week, James and I caught up with each other, bought a computer (ours had broken a few weeks ago), enjoyed restaurants in Manchester (especially Piccolini) and set up our Fantasy Premier Leagues. (The leagues are online fantasy soccer leagues, where you play against others in the league, by picking your own team, managing trades and watching certain players all year. We set up a family league for both English Premier and Serie A).

We packed up the bikes and left Manchester; 1 rental van, 2 airplanes, 1 train and 2 small bike rides later---we were at our place in Florence. We decided to rent an apartment for the last 2 weeks of August. That way we can adjust to our new home city, get a sense of neighborhoods by day and night, and finalize proximity of the boys' school and calcio (aka soccer).

Caleb has a wee injury on his heel, so these first few days of Florence have been via biciclette (bikes). Not a bad way to get oriented, and to get a sense of how long rides would take from A to B to D and K. Besides, we will be getting around via foot and bike, so we better get used to it.

So far it has been around 100 degrees Fahrenheit and we are learning to love 1. shade, 2. very cold water and lots of it and 3. air conditioning. There are hordes of tourists here, despite the raging heat and mass exodus of Italians. I knew the country took the month of August off, but I am genuinely amazed (and really quite impressed) at all the little paper signs on windows stating temporary closure for all of August. 'We' will all return in September. And life will go on.

But we are here, already looking forward to what life as usual will feel like, when the tourists start to dissipate and the stores and restaurants reopen. Students will come from all over, we will have a permanent address, cram our brain with Italian verbs and prepositions---and sink right into this new life.

And you know I couldn't leave an Italian post without including something about food, so... Food highlights so far: gelato, granita, watermelon chunks on a stick, the abundance of chianti, shots of limoncello with a nearby restaurant owner, good espresso, homemade ravioli, a butcher. I say the latter with braced enthusiasm: I don't yet know where we will land, and therefore which outdoor market we will frequent (I look forward to loving my more permanent butcher). But we did find one, and promptly bought some pork loin beautifully wrapped in bacon... dinner in. We loved it. Salute!
AUTHOR janelle