Okay, this post is long overdue - about 7 weeks coming. But, I have kept copious notes. ;)

June was a month that was bicycling intense – meaning we logged a lot of kilometers. We started the month in North Holland, and ended the month at the southernmost point in the Netherlands (Maastricht). In between, we crisscrossed the country twice and saw a lot of cows, sheep, goats and windmills. It is hard to narrow it down to the Top 5, but here goes:

5. Reposing in Weert. After 100’s of kilometers and 5 consecutive days of riding (unplanned), we had the great pleasure of landing at a lovely B&B in Weert (a member of the Vrienden op de Fiets network). The family offered us comfortable accommodations and a lovely garden, complete with swinging bench, fishpond and walnut tree. But, more importantly, they extended a warm welcome to us (strangers), and a great dinner under the stars. It was the “recharge” we needed after several days on the bike. We felt at home and were ready to move into the garden for the remainder of the summer.

Days at the beach in Schenveningen and Katwijk. After weeks of cycling across the Netherlands, we made our way to the beach. Great fun! Although our accommodations were negligible, the beachfront made up for any shortcomings. We had splendid weather in Schenveningen (upper 80’s), and enjoyed a secluded section of the beach in Katwijk. Burying ourselves in the sand, building sand castles, counting a handful of topless women (a surprise to the boys), playing soccer in the sand, and jumping down dunes was a welcome reprieve from our bicycle seats. Needless to say, Janelle and I enjoyed a few cocktails beachside too. 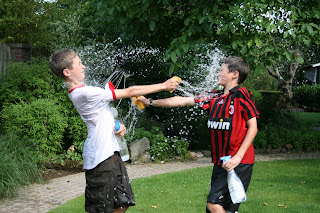 3. Water fights in Sittard. When traveling with adolescent boys and staying in B&Bs, we could never be certain how we would be received. However, sometimes we were amazed at the hospitality of our hosts: Sittard was a highlight. After a lengthy 50km ride on a hot day (including a brief foray into Germany), we were graciously received by our hosts. After assisting us with our bikes, they immediately brought out cold beer (“good for parents of adolescents” they said), and then buckets of water with sponges. Our kids looked on with some confusion, but then our hosts immediately demonstrated the joy of simply soaking a sponge and throwing it at each other in the garden. Obviously a water fight ensued, and smiles and laughter filled the air. We later enjoyed dinner and had a wonderful evening with our hosts.

2. Gouda. Of all the cities across the Netherlands, Gouda is the embodiment of all good things Dutch. We spent 3 nights in Gouda at the B&B Aan de Gouwe and enjoyed every minute of it. Gouda offers all the attractions of a big city: canals, a fantastic cathedral, a huge market and piazza, good food and specialty shops. It also captures the benefits of a small city: clean, easy to walk, affordable and very hospitable. We had great food (Spanish tapas, Italian), visited the Great Kerk (remarkable stained glass), played soccer in the Markt, and were spoiled by a personal tour of a Stroop Wafel factory (which originated in Gouda). It was a fantastic experience: we definitely plan to return.

1. An evening with friends in Eindhoven. In the midst of our trip we had the pleasure of connecting with extended family friends (whom we had never met). To our good fortune, they had two kids around the same age who had an affinity for riding bikes, playing soccer and games. We talked, ate and drank for several hours, while the kids readily entertained themselves (even though our kids spoke only English, and theirs only Dutch). Needless to say, after several bottles of prosecco, a barbecue, dessert, and digestivos under the stars, it was a day and night to remember. (Thanks Benno, Alexandre, Fleur and Bas!) 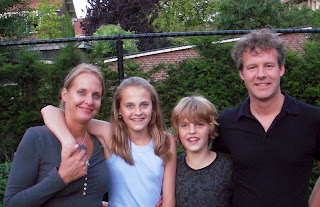 In addition to the above Top 5 for June 2009, there were several other memories made in June that deserve honorable mention: a fantastic stay at Villa Augustus in Dordrecht – a renovated industrial warehouse turned into boutique upscale hotel with an artisan organic farm-to-table restaurant (we definitely will return); the medieval festival at Heusden – a fortified town where every citizen was immersed in middle age garb, foods and events (think of walking on to the set of Lord of the Rings); retracing the steps of Van Gogh in Neunen – living history; and, last, but not least, riding along, through and with cattle, sheep and goats across the Dutch countryside.

June 2009 will be forever etched in our memories. 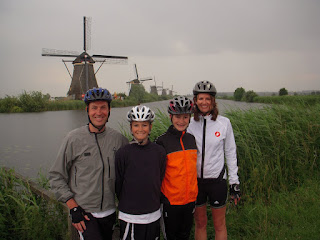