It is often said that the best experiences in life are often unplanned – such was the case for us during the month of October. While the month of September was the month when we settled into our Florentine lives, October was the month of an unexpected diversion to the United States for THREE WEEKS. As a result, we were only in Italy for one week during October.

It is a long story, but essentially we had to return to the United States to secure a long-term stay visa (in person from the Italian Consulate). Although other families we had spoke with stayed in Europe indefinitely on a travel visa (traveling between countries) – that loophole was closed by Italy in late July 2009 (while we were cycling across France). As a result, notwithstanding the appeal by our Immigration Attorney in Florence, our request to stay on a travel visa was denied at the end of September. Bummer! (Expensive) Lesson learned: never rely on loopholes. Ugh!

Although we could have legally stayed another 45 days in Italy, we elected to return immediately to the United States to minimize impacts on our kids’ school and soccer. You could read more about our crazy trip in Janelle’s prior post: Segue to the States.

Here are my Top 5 Memories from the unplanned events in October 2009:

5. Swimming with Cousins in Vancouver, British Columbia. During our stay, we made a brief day trip to visit family in Vancouver, BC, where we “soaked” up good conversation, food and the local community pool. Our family has a special affinity for swimming pools; but they are doubly fun when they include cousins, water slides, rope swings and lazy rivers. We made the most of our time at the pool, including plenty of “whoo-hooing” down water slides, flips by everyone off the diving platform (including my lame attempt), and the token game of tag in the pool. A fantastic outlet for energetic kids and fathers who like to think they can keep up. 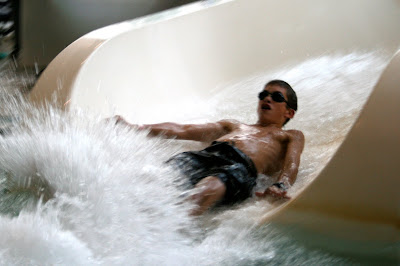 4. Playing Guitars with Cousins in Yakima, Washington. Notwithstanding several years of lessons on the saxophone and viola, our adolescent boys are developing their own appreciation for music and instruments. During our stay with family in Yakima, our boys’ curiosity was peaked by their cousin when she showed up at dinner with her acoustic guitar. After a year of teaching herself via YouTube! she has developed into a good guitar player (her father, my brother Mark, is also a fantastic guitar player). Needless to say, our boys were entranced as their cousin belted out classic tunes from Boston, Kansas and U2. Awesome! No surprise that one of our boys, Caleb, is now playing the guitar in Florence, Italy (a recent birthday gift). 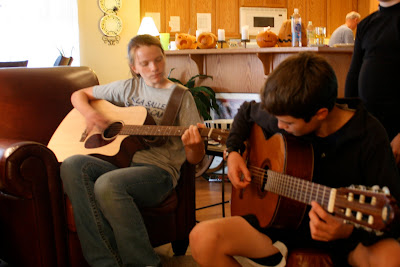 3. Breaking Ice with Canoes in Montana (to help the Minks!). Montana should be re-named the state of “Adventure” – since it never seems to end. We had never spent anytime at the family cabin during the month of October; this year was our first experience. In stark contrast to sunny summers and snowy winters, October offered gorgeous fall colors (as the larch trees turned golden), relatively warm, partially sunny days and freezing cold nights (that resulted in ice on the lake each morning). We elected to pull out a canoe from summer storage and provided the boys with countless hours of entertainment to “break ice” on the lake. Given that the ice was about 1-2” thick, it took some effort. However, they boys were inspired to carve a path for the resident minks that wanted to travel from a nearby gurgling creek to a swim dock on the lake. It was fantastic! 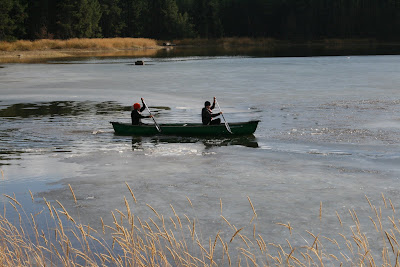 1. Spending time with Extended Family. The most enjoyable aspect of our trip, by far, was spending time with extended family. We both come from big families, with lots of nieces and nephews. Naturally, everyone is busy with work, school, sports and other extra-curricular activities. Nonetheless, we managed to see everyone in Washington, Oregon and Vancouver during this brief stay (with the exception of one nephew, and my sister’s family on the East Coast). It was amazing to see how much everyone had grown and changed in just 6 months since we originally departed for Europe back in May. Needless to say, we spent a lot of time catching up, laughing and playing. Time flies. Fortunately the memories live on (provided they get written down to jog my memory later!). 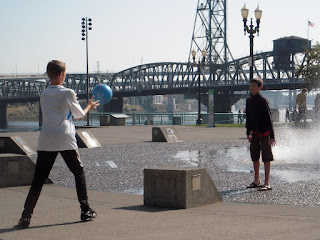 Other Top 5 memory runner-ups, and strong candidates for a story-telling of their own, include: running in the Rome airport to get receipts stamped for a VAT tax refund before departure, having our jet engine “catch-on-fire” during take-off from London after a 3-hour repair (fortunately, the flight was aborted, and 11 hours later we took off on a different plane that did not require repair), eating American thick-cut bacon, driving over Chinook Pass, Washington on a clear fall day (while my kids sang along to the Juno Soundtrack), playing cards, dominoes and carpet ball, picking apples, submitting paperwork in person to the Italian Consular representative in Portland, Oregon, playing in Portland fountains, painting my brother-in-law’s house, cutting, stacking and burning wood in Montana, and (without a doubt) Janelle’s puking and fainting episode somewhere over the Atlantic on our return flight back to Europe!

Life is a mixed bag. We’re all thankful to be back in Italy (on the ground), healthy and immersed in our Florentine lives. While unexpected adventures are often memorable, routine is a welcome comfort too (wherever “home” may be).
AUTHOR Giacomo