The penultimate day of my 40th birthday weekend was an easy 25+ mile ride along the Columbia River from St. Helens to Portland. Following a restful night and not so enticing stay at the Best Western, we were ready to depart early for Portland. The boys filled up on pancakes, while Janelle and I winced during our meal – a “free breakfast buffet.” (For your information the word “buffet” is akin to a four-letter word in our local-vore, organics only, chef-bespoken household).  The ride from St. Helens to Portland was uneventful. No flats! Just the occasional stop to pump up Caleb’s slow leak (we went through all 5 spare tires!).

The ride along Oregon Highway 30 is easy, but less appealing than central Washington in terms of scenery. Riding through several industrial areas in Northwest Portland was not ideal; however arriving in the Pearl District was a delight (home to an abundant number of cafes, boutiques and Powell’s bookstore). For those who have not visited the Rose City; Portland is akin to the Netherlands in terms of cycle-friendliness. Dedicated bicycle lanes are abundant throughout downtown, and the gradual slope alongside the river makes it easy for riders of all levels.

Thanks to Priceline, we got to enjoy a fantastic 4-star hotel in Portland center city – the Hilton Portland Executive Tower (what a contrast to St. Helen’s Best Western!). After checking in, we took a swim in the pool and then relaxed in the hot tub. (I need a pool / hot tub at our home in Seattle!) That afternoon, we mozied through downtown, landing at Portland’s famous “food truck” scene at 9th and Alder. We all got our individual fix at our preferred street vendor. Yum!

Early afternoon, we strolled south to Director Square at 8th and Taylor – a great outdoor public space, boasting a vibrant scene for people watching and public fountains (attracting children for endless entertainment). We love water! Late afternoon, we reposed at the Regal Cinema (across the street). Perfect! In the evening we enjoyed dinner at Dragonfish, a Northwest staple restaurant for asian food. Our fabulous friends, Matt and Kristin, joined us afterwards (prior to their departure to sail to Canada).

We dropped Anthony and Caleb off at the hotel (to unwind), while Janelle and I went out with our friends to Bailey’s Taproom (a local brew-master pub). Amidst the laughter and stories of Matt and Kristin’s voyage preparations, we got to enjoy several of Portland famous brews. The great benefit of the cycling trip – indulging in food and spirits with NO guilt. ;) Late that evening we casually made our way back to the hotel for a quick nightcap and goodbye to Matt and Kristin. 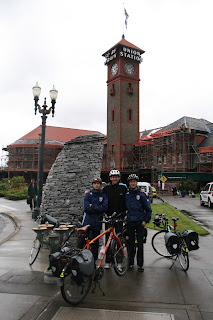 We slept well and then had a final rendezvous with one of my favorite relatives – Uncle Everett! We had a cup of coffee and reminisced about past times in Portland. Anthony and Caleb got to enjoy some great stories of Everett’s adventures cycling up pill-hill in Portland (as a young doctor, decades before Portland became a bicycle Mecca). The cap stone of Everett’s stories was the daily battle he encountered with Portland’s metro bus service: he eventually installed a rubber-mallet on his bike handlebars to “thump” the buses who were not providing due respect to “share the road”. We laughed heartily.

Finally, we departed Portland – by train! After 220+ miles of cycling, countless memories and adventures (e.g. flats), my 40th birthday weekend came to an end. We loaded our bikes aboard Amtrak (for only $5 each – EASY!), then slow-rolled north to Seattle. It was a fantastic birthday weekend – one which I will recall fondly for decades to come. My birthday wish came true. ;)
AUTHOR Giacomo