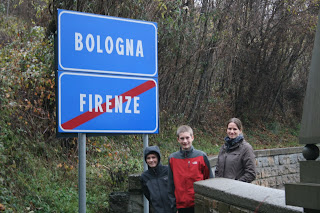 This last weekend (November 28-29) our family visited Bologna. The main reason we made this trip is because Monday was a national Tuscan holiday, and we did not have school. So our family scheduled a trip to Bologna. We ended up leaving just after my soccer game, where we hopped into a rental car and took the "shortest route" to Bologna. First of all, we did not take the train due to my game timing and train timing to Bologna---we would of had to wait 4 or so hours after my game, so instead we went by car. Second of all, I put shortest route in parenthesis, as this on our GPS meant avoiding toll roads, as in no freeway. So we took a ride in the country, found a WWII memorial, with foxholes---along with a bomb hole or two---and a small hill Santa Lucia, with Mary and Jesus on the crest (which we decided to walk up to). Along with some amazing views, we all enjoyed our trip to Bologna. When we got to Bologna we checked in to our hotel, dropped off our bags and walked downtown.

Now for the first thing on my list: Lights. We left Florence at midday, took the long way around, arrived in Bologna at night---and enjoyed the Christmas lights throughout the city (similar to Florence it has a new style of lights in every street). Almost immediately we were stunned by the curtains, arches, and globes of lights, which spanned across each road. We walked around and shopped at the expansive shops. Bologna is not a really touristy city like Florence, but seems more business oriented, between good food, and actually a lot of clothes. 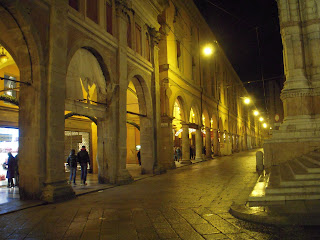 for these, and even though it was rainy while we were in Bologna... we didn't really care. We were always under cover, because every sidewalk had a portico (see picture). Other than the little back roads, every single sidewalk in the city central seemed to have porticoes. It may sound overly costly, and takes forever to put up, but the funny thing is that, this city has been a large city for hundreds and hundreds of years. So the people running it today have not paid for porticoes to be built, they only pay for maintenance. They were amazing, and for me added an entire new level to the city.

Now for the third thing: Food. For the night that we were in Bo 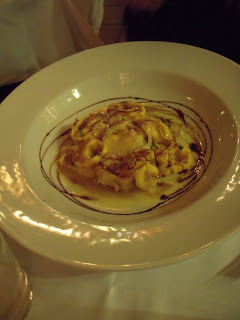 logna, "The City of the Fat", we went out to a restaurant called "Antica Osteria Romagnola" (ranked number 3 of 147 in Bologna on Trip Adviser) it was amazing. I ordered a delicious Parmesan tortellini for my first course, then a reduced wine sauce pork chop for my second, and a finish of a delicious chocolate mousse, which was great. For me, you can't for wrong with mousse. Overall for me a 5 of 5, absolutely delicious... I might as well have rolled home. The restaurant had a really great atmosphere, and the staff were really nice. Other than that meal, the other food in Bologna looked appetizing, and as it is not a touristy city, the food was not gross, overpriced, and greasy. The sandwiches were a competition, and you could go to many delis and find a good sandwich for lunch.

And then number four: Towers. When you say leaning towers, what do you think? Well Pisa of course, but then you realize towers, Pisa is only famous for the leaning tower of Pisa. Well, Bologna has two large towers that also lean. The taller tower is 8 feet off center and the shorter tower is 12 feet off center. The shorter one actually had its top lopped off so that it would remain standing (48, and 97.2 meter 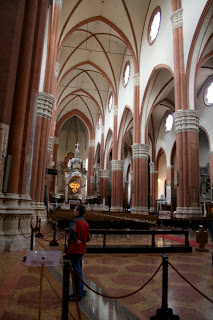 s). Anyway, we climbed the taller tower (498 steps) and were constantly foiled by landings that looked like the top, but in reality you still had to keep climbing. Caleb and I made good use of our soccer fitness. After the climb we reached the top, where we enjoyed a stunning view of Bologna. We saw the roads reach out from the towers, to where the ring wall used to stand.

We also saw the church of Bologna; it was huge, and was going to be larger than Saint Peters in Rome but the pope vetoed this notion. Although we have not seen Saint Peters yet, we were awstruck by the ornate church, in all its godly grandeur. Overall for me Bologna: 10 of 10. We hope to return later this year with grandparents, and it is definitely a great place for families to visit. One possible bummer is that we did not see a single ceramic shop, and we often like to browse in these shops---my parents for table ware, me for a tile of the city.
AUTHOR Anthony