Following the “trip of a lifetime---cycling across central Europe for the summer,” August was the month that we began to wind down. We spent the first 2 weeks of August in England, then made our way to Florence, Italy for the upcoming school year.

Notwithstanding the fact that we actually unpacked at each destination (a new experience), the adventures continued. Here are my Top 5 memories from the month of August 2009:

5. London Cycle Tour. Although we were no longer on our bikes everyday, we dedicated a day in London to cycling across, through and around all the major London parks (Hyde Park, St. James Park, Green Park, Regent’s Park). Any family can enjoy cycling in a park for the day. But, crisscrossing London’s busy town center on bicycles is not for the inexperienced. It did make for an incredibly memorable day: tranquil, lush and expansive parks contrasted with adrenalin-pumping rides and near collisions with double-decker buses. London has built some bikes lanes, but most British drivers still remain wholly unaware of the existence of cyclists.

4. Swimming in Florence. Anyone who has traveled in Italy knows that the cities are literally “shuttered” in August: the heat can be suffocating. I would guess that less than 20% of the businesses in Florence were open in August (and those that were open were predominantly tourist-driven). Our goal quickly became: locating the best outdoor public pool. We spent entire August days at the Piscina Le Pavoniere, along the Arno River just west of Florence city center. It was a great respite from the summer heat and provided a fantastic opportunity to have fun swimming together.

No visit to London (as a tourist) is complete without attending some theatre; we were not disappointed. We enjoyed two shows: Jersey Boys and Billy Elliot. Both were kid-friendly, offered fantastic sing-along melodies, and easy-to-follow stories. In the boys’ words, it was an “amazing experience” to witness such great talent on stage. We won’t forget the weather either - prototypical London downpours en route to the theatre. Fun!

2. Manchester Retreat. This was definitely #1 for me, but given it wasn’t a family experience in the strict sense of words – it falls to #2. While our boys were at Manchester United Soccer Camp for the second week of August, Janelle and I reposed at a 4-star hotel in downtown Manchester. After spending three intense months traveling with our two adolescents boys (often in close quarters), a week “off” for Janelle and myself was just what the doctor ordered. And, yes, we soaked up our time together: sleeping in, exercising, swimming at the spa, reading, walking, eating well and just being carefree together. We found some great restaurants in Manchester (try Piccolino and Pesto) and shopping too. It was wonderful to soak up time with Janelle and reflect upon the past summer, goals for the coming year in Florence, and taking time for contemplation (what do we hope to accomplish with our lives. Our Manchester “retreat” was reinvigorating for us on many levels. Meanwhile, the boys enjoyed their week at Manchester United soccer camp: it was a well-timed week off for all of us. 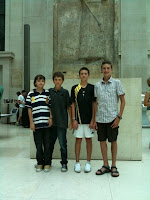 1. Visiting Friends in London. Regardless of the novelty of the places we visit, we continue to find that people end up making our travel experiences the most memorable: London was no different. The first weekend after our arrival in London, we had the pleasure of going to dinner at the home of Raphael and Simone, and their young girls. Although they were departing the next day for vacation, we had a wonderful meal at their home, highlighted by great conversation, laughter and delectable food. Raphael is French, so naturally he is a great chef. Thank you!

We also had the pleasure of spending several days with Chris and Natasha, and their sons Clarke, Myles and Jasper, in London and Windsor. We enjoyed meals together, toured Windsor, the British Museum, shopped and drank a lot! While the Brits drink beer like fish (and remain standing), Janelle did manage to surprise Chris and Natasha with the potency of her lemon-drops. ;) We enjoyed Jim Gaffigan, played soccer in the parks, and simply enjoyed the merriment that is afforded by a group of adolescent boys. Altogether, fantastic memories that we hope to relive again.

Other August 2009 experiences that qualify for honorable mention: watching Harry Potter VI in London (then walking over the Millennium bridge – destroyed in the film), riding the London Eye, touring Westminster Abbey and the Tower of London, touring Old Trafford stadium, riding the Tube in London, renting and driving a stick-shift cargo van in Manchester, (to transport our boxed-bikes to the airport), arriving at Pisa airport (and re-assembling bikes again), arriving in Florence, and two-a-day soccer practices in the sweltering August heat (for the boys).

All in all, the month of August marked the conclusion of our “cycling trip of a lifetime,” and the beginning an incredible cultural experience as we settled in to “live” in Florence for the school year (a separate adventure in and of itself). Stay tuned!
AUTHOR Giacomo